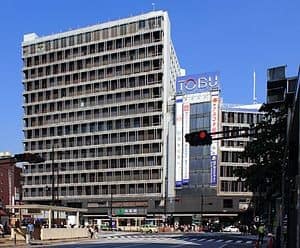 Ikebukuro Station (池袋駅 Ikebukuro-eki?) is a major railway station located in the Ikebukuro district of Toshima, Tokyo, Japan, shared by East Japan Railway Company (JR East), Tokyo subway operator Tokyo Metro, and the two private railway operators Seibu Railway and Tobu Railway. With 2.71 million passengers on an average daily in 2007, it is the second-busiest railway station in the world (after Shinjuku Station), and the busiest station in the Tobu, Seibu, and Tokyo Metro networks. It primarily serves commuters from Saitama Prefecture and other residential areas northwest of the city centre. It is the Tokyo terminal of the Seibu Ikebukuro Line and the Tobu Tojo Line.