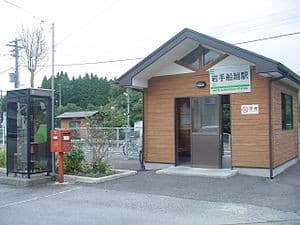 Iwate-Funakoshi Station (岩手船越駅 Iwate-Funakoshi-eki?) is a JR East railway station located in Yamada, Iwate Prefecture, Japan. Following the 2011 Tōhoku earthquake and tsunami, operations at the station were suspended and have been replaced by a provisional Bus Rapid Transit line. A sign on the station platform indicates that this was the easternmost railway station on Honshu island.