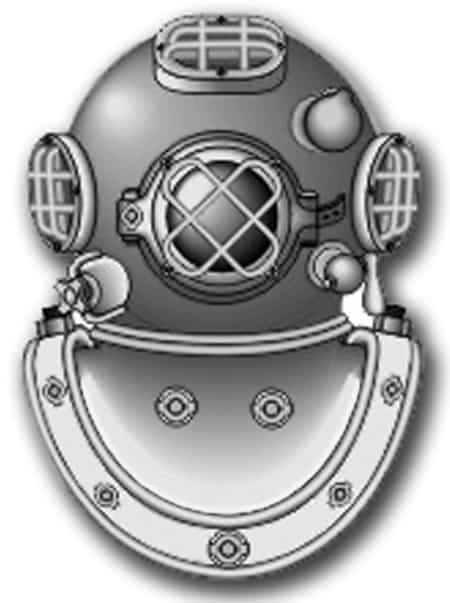 Navy divers are trained at the Naval Diving and Salvage Training Center (NDSTC) in Panama City, Florida. Initial training is an arduous 8-10 month process from when someone enters “boot camp” until they are rated as a navy diver. Although rated as an ND, navy divers are not authorized to wear the second class dive pin until they qualify as diving and salvage warfare specialist (DSWS) at their first assignment—this normally takes an additional 1–2 years.

The navy diver works in extreme conditions, performing various underwater tasks ranging from underwater ship repair, underwater salvage and special operations/special warfare type diving. Because their area of operations are so varied, they can be required to utilize any type of diving equipment for use in any depth or temperature in any part of the world. Certain diving qualification allows NDs to live and work at extreme depths for days or weeks at a time, a discipline known as saturation diving.

Personnel that graduate from second class or first class dive school; and ultimately master diver comprise the rating navy diver. NDs are the in-water operators and supervisors for the various mission areas mentioned previously as their primary day to day mission is that of in-water operator and/or supervisor. There is also the diving officer designation/badge for commissioned officers. There are three enlisted diving badges/qualifications in the ND rating:

Navy hospital corpsmen can qualify as a diving medical technician (DMT), where they are given training in medical aspects of diving. Primary responsibilities are to provide medical advice and treatment to diving personnel. They also instruct members of the diving team in first aid procedures when the presence of diving medical personnel is indicated.

Additionally, there is a SCUBA diver qualification primarily for those stationed on submarines to serve as sub divers in a limited capacity. Navy SCUBA Divers are also trained at NDSTC at a 5 week course. Their duties consist primarily of conducting occasional inspections on the submarine they are stationed on. SCUBA divers maintain their Navy rating such as ET or MM as their diving NEC is a collateral duty not their primary one.

Diving medical personnel evaluate the fitness of divers before operations begin and are prepared to handle any emergencies which might arise. They also observe the condition of other support personnel and are alert for signs of fatigue, overexposure, and heat exhaustion. The physical fitness test has been shown to be a poor predictor of job task performance.[1]

The test consists of the following carried out in the order given:

Note: The times and quantities listed are for passing the screening test only. Each candidate’s scores are submitted and the candidates with the top scores along with ASVAB exam scores will be selected and given a navy diver contract. Passing the physical fitness test is necessary but by no means guarantees the candidate a contract.

The navy diver rating was announced in Naval Administration Message 003/06 and consists of sailors with the following Navy Enlisted Classification (NEC) designators: 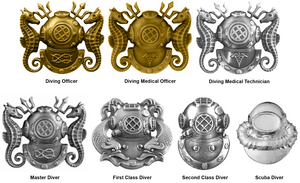 This is a listing of the paygrade, rating designator, and full rating name for Navy Divers: