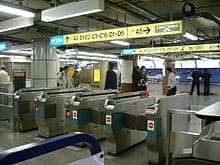 Otemachi Station (大手町駅 Otemachi-eki?) is a subway station in Chiyoda, Tokyo, Japan, jointly operated by Tokyo Metro and Toei Subway. It is served by five lines, more than any other station on the Tokyo underground network, and is thus the biggest subway station in Tokyo.[1]

Otemachi is also within walking distance (either at street level or via underground passages) of Tokyo Station.