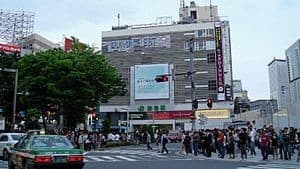 Serving as the main connecting hub for rail traffic between Tokyo’s special wards and Western Tokyo on inter-city rail, commuter rail, and metro lines, the station was used by an average of 3.64 million people per day in 2007, making it, by far, the world’s busiest transport hub (and registered as such with Guinness World Records). The station itself has 36 platforms, including an underground arcade, above ground arcade and numerous hallways. There are well over 200 exits. Another 17 platforms (51 total) can be accessed through hallways to 5 directly connected stations without surfacing outside.